Kitmax and friends plan to re-run an LRDG desert raid of the 1940's. The map in the previous post refers. Background notes about the LRDG are as follows:
LRDG Notes (trawled from multiple sources)

Ralph A. Bagnold (1896-1990) had an innate curiosity and inventiveness as a young boy that was encouraged by his father, a British Army Royal Engineer. Young Bagnold followed a family tradition when, after completing a war-shortened training program in 1915, he became an officer in the British Army Royal Engineers. He spent three years in the deadly trenches in France, after which he utilized a special military educational leave program to study engineering at Cambridge University, receiving an honours degree in 1921 and returning to active duty with the army.

1916 - Australian Light Car Patrol reaches Dakhla
The British Light Car Patrols are formed to patrol the north western desert frontier of Egypt against the Senoussi threat. The Australian Light Car Patrol hoists the British flag in Dakhla on 18th December 1916, and conducts several surveying patrols to the south & west of Dakhla till June 1917. (The pass 60 kms to the south of Dakhla along the Darb el Terfawi is named 'Australia Pass'). In 1917 Siwa is captured from the Senoussi by an armoured car division making the crossing across the desert from the Mediterranean coast to Siwa in a surprise attack.
The birth of the LRPs.
“Much of the information concerning the LCP comes from : The Other Desert War, by John W. Gordon”
Ralph Bagnold and other familiar names to the LRDG (Pat Clayton, Bill Kennedy Shaw, Guy Prendergast, to name a few) had been avid desert explorers between the wars and had spent numerous hours of their free time and personal money building on the methods learned by the LCP in getting around the desert. Bagnold had made major improvements on the Sun Compass, and managed to cross the Great sand Sea on several occasions using Ford Model A trucks. A feat considered impossible by just about every desert explorer!
Before the outbreak of the war in 1939 Bagnold proposed that the British Army form a long range patrolling unit to spy on its neighbours to the west. His proposal was roundly dismissed as being diplomatically unsound as well as physically impossible. Most of the British senior staff felt it was impossible to operate motor vehicles through the uncharted desert. They all seemed to feel their was no need or no feasible way to accurately chart the desert. Furthermore it was felt that any long range reconnaissance could be accomplished with aircraft.
Field Marshall Archibald Wavell was in command of the Middle East. He was aware of Bagnold's past desert explorations and has Bagnold assigned to the 7th Armoured Division(Desert Rats). Bagnold did not pitch his idea for long range patrols right away. In time, he began to propose such plans with his immediate commander. While his immediate commander was keen on the idea, higher commanders were not. Eventually however, Bagnold went around the chain of command and with some help got his proposal in Wavell's hands. The proposal was met with enthusiasm and a short deadline of six weeks to get the unit operational. Bagnold was transferred to Wavell's headquarters. The unit was called the "Long Range Patrols" or Long Range Patrol Units.
Bagnold was given a free hand to call for volunteers and decided early on to look for more robust "colonial forces" that were coming into the theatre, assuming they would be more self reliant than British Units. His first choice were Australians, assuming the arid outback region would have made them acclimated to a region like the Sahara. Unfortunately the Australian Divisional commander did not want his men be led by a British Officer. The New Zealanders were approached next. Their commander, Lt. Gen Bernard Freyberg had won the Victory Cross in WWI and was a colleague of Wavell. Within a few days Bagnold had his volunteers and they were considered the best that the Division had to offer.
The initial patrol was led by Pat Clayton, one of Bagnold's friends. What they found was a demoralized army in no hurry to fight. The information proved accurate and was instrumental in the campaign that followed. Wavell realized he was in no immediate danger and informed London that 2RTR and 7RTR could take a longer safer passage to Egypt instead of being rushed through hostile waters.
A New Name and New Patrols.
With the success of the initial patrol and some following raiding missions, Wavell immediately authorized the doubling of size of the LRP and the unit took on its new name, the Long Range Desert Group, LRDG. Unfortunately the New Zealand division could not spare more men and Bagnold actually had to give a few of the originals back to the division!
Bagnold was forced to look else where and that elsewhere was once again newly arriving divisions. Among those arriving were the Coldstream Guards and Scots Guards, two of the Britain's finest division, and numerous Yeomanry units.
Yeomanry were mounted territorial or reserve units. Bagnold realized that the various backgrounds of the professional and the part time, and the colonial may not be a good mix so instead of integrating the new men into the New Zealand patrols he organized two new patrols "G" for Guards and "Y" for Yeomanry.
The Guards 'G' patrol were on the 1940-1941 Murzuq raid, under command of Capt Michael Crichton-Stuart (Scots Guards).
The Yeomany 'Y' patrol would have been recruited later that year, 1941.
"W" patrol was gone but the New Zealanders still had "R" and "T" patrol. The letters coming from Maori words used on their vehicles. Later another patrol would be raised from the southern area of the colony of Rhodesia and this patrol would take the letter "S" for south.
Posted by kitmax at Tuesday, May 23, 2006 No comments: 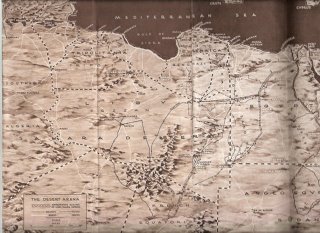